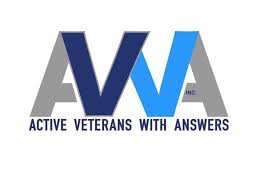 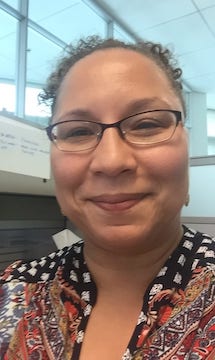 Kanisha Armintia is the oldest daughter of James Pippen and Donna Brown. She graduated from Lafayette High School in 1995. She enlisted in the United States Navy in October 1994. Following completion of basic training at Recruit Training Command Great Lakes, Illinois, she reported to Aviation Electronics Technician “A” school in Millington, Tennessee. In 2003, she converted to Navy Counselor.

She participated in multiple squadron detachments and completed counter-drug operations with HSL 84 onboard the USS John A. Moore and USS George Phillip. She also deployed to

Baghdad International Airport in support of Operation Iraqi Freedom in 2003 with HCS 5.

Along with her extensive experience with reserve component support and over 15 years of financial experience with the Navy Counselor Association as their treasurer and assistant treasurer; Kanisha graduated from Columbia College with a Bachelor’s degree in Business Administration. She is currently pursuing a Master’s of Business Administration with Saint Leo University. She is married to CWO2 Arnel Armintia from San Diego, California and they have three children; Kailene, Jada and Brandon. 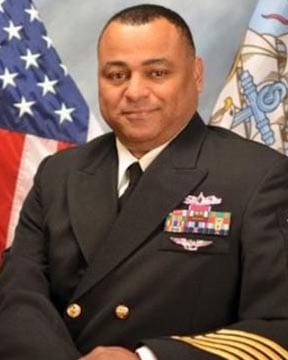 Mack Alston was raised in Paterson, New Jersey. Upon graduating from Eastside High School in 1984, he attended Northeastern College studying Liberal Arts until 1986. He then entered Navy Recruiting Command Great Lakes, Illinois. His initial sea assignment was aboard the USS HALEAKALA (AE-25) homeported in Agana, Guam. Reporting as an undesignated Seaman and throughout this tour worked his way up to become the Captains Yeoman. It was also during this tour he was temporarily assigned as a Student to YN “A” school in Meridian, MS.

In May 1990, he then transferred to the Bureau of Naval Personnel in Washington, DC to the Officer Performance Division (Pers-82). Upon completion of this assignment, he then reported as a student to Flag Writer “C” school in Meridian, MS. His shore assignments include duty as the Flag Writer to Commander, Naval Air Systems Command, Patuxent River, Naval Air Station; OPNAV N31/N52 “Deep Blue”.

In July 2004, he received orders to Carrier Strike Group NINE, homeported in Everett Washington aboard the USS ABRAHAM LINCOLN (CVN-72) as the Flag Writer. Upon completion of a deployment in the Western Pacific that included Tsunami relief operations, he was then reassigned back to the OPNAV staff in the Pentagon as the Flag Writer to ACNO (Plans, Policy and Operations (N3N5B). After a brief return to the OPNAV staff, he was then hand-selected by the Chief of Naval Operations to serve as his Deputy Protocol Officer. After several months in this assignment, he was promoted to the position as Flag Writer to the CNO. In 2007 while assigned as the CNO’s Flag Writer, he was nominated and selected to attend the Senior Enlisted Academy in Newport, RI. Graduating with class 129 (Blue Group). During a transition of the CNO’s staff in 2007, he was requested to continue in his position as the Flag Writer to the incoming CNO. He continued in this position until the transition of the CNO’s staff again in September 2011. Following the transition of the CNO staffs, he stood up the CNO transition office from September 2011 until retirement in September 2012. 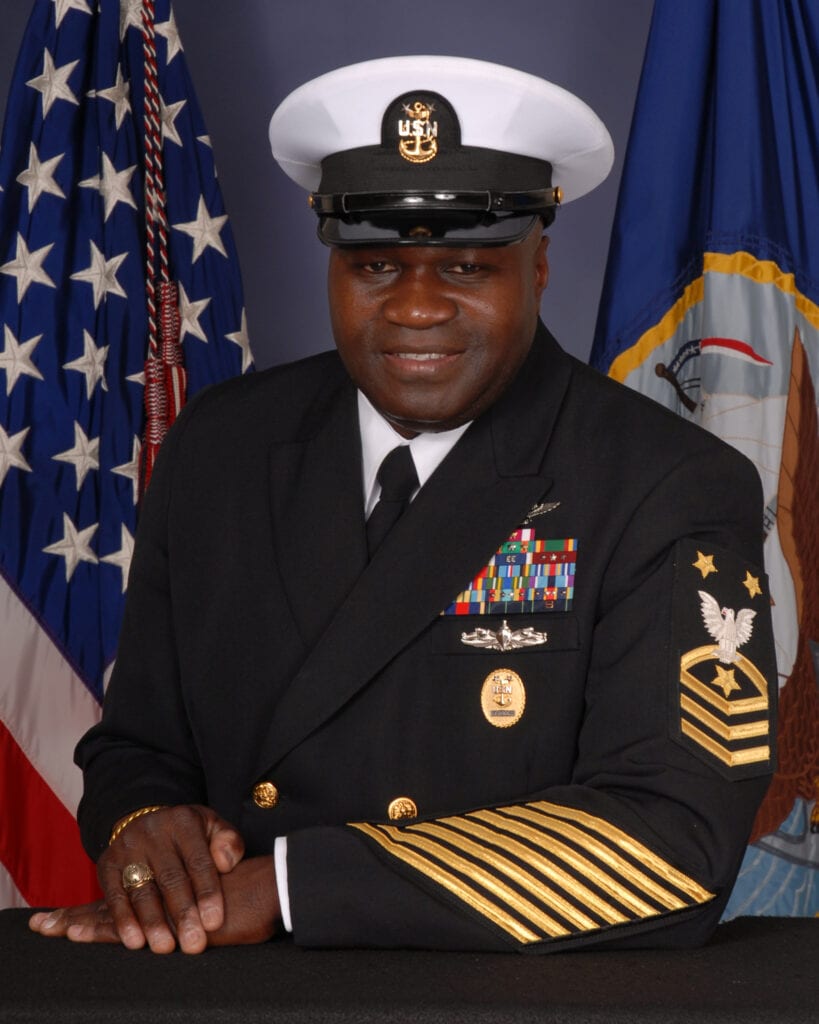 Force Master Chief McClure is a native of Roxbury, Massachusetts. He enlisted under the delayed entry program in July of 1981 and completed Basic Training at the Recruit Training Command Great Lakes, Illinois in March 1982 and went on to attend Airman Apprenticeship training in Great Lakes, Illinois. Upon completion, he then reported to VS-41 FRAMP and qualified as a S3-A Viking Plane Captain and commenced his career in Naval Aviation Maintenance.

FORCM McClure completed his sea duty aviation maintenance career as the deployed MMCPO and SEA for DET three in HSL 51 based in Atsugi, Japan and deployed onboard USS OBRIEN (DD 975) and the USS KITTY HAWK (CV 63).

FORCM McClure was selected as a Command Master Chief in 2006 and served as Command Master Chief of VFA 27 the ROYAL MACES and Carrier Wing Five CMC located in Atsugi Japan deployed onboard the USS KITTY HAWK (CV 63) AND USS GEORGE WASHINGTON (CVN 73). In addition, he is a graduate of the Navy's Senior Enlisted Academy, Class 109 (Khaki).

Force Master Chief McClure has earned a Bachelor’s degree in Business Management and Human Resources and he currently resides in Chesapeake Virginia. 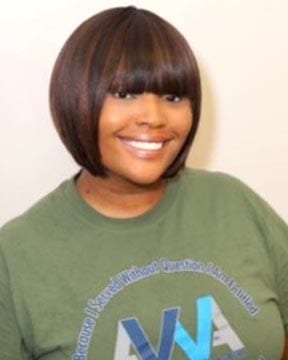 Nakisha Graves King was born in Columbia, South Carolina and enlisted in the United States Navy in July of 1998, immediately after graduating from W.J. Keenan High School. Nakisha served as a Culinary Specialist and enjoyed traveling the world and especially working with various Seabee Battalions where she earned her Seabee Combat warfare qualification pin. Nakisha transitioned out of the Navy in 2006 and currently resides in Hampton, Virginia with her husband and 3 sons.

As a Marketing professional, Nakisha has over 10 years of experience in Business Administration, Human Resources, Public Relations and Quality Assurance. Nakisha has worked as a Program Support Assistant at the Hampton VA Medical Center where she recruited, interviewed and retained approximately 600 volunteers for the Department of Veterans Affairs Voluntary Services Office. Nakisha also worked as a Retirements/Transitions Clerk at both Fort Monroe and Fort Eustis military base processing orders and DD 214's for both officers and enlisted personnel.

Nakisha's passion is connecting with her fellow Veterans while sharing knowledge and resources that assist in their transition from active duty to the civilian sector. Nakisha was able to fulfill that passion when she worked at the Department of Veterans Affairs Voluntary Services Program. During this time Nakisha acted as a mini human resources representative serving over 50 Veteran Service Organizations, community leaders, Veterans, military personnel, and others involved with providing services to our Nation's Veterans. 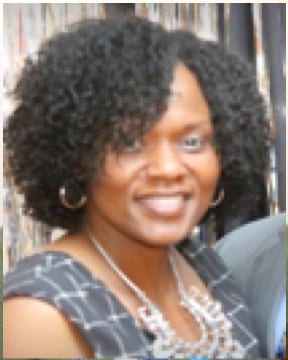 Kimberly was born in Asheville, North Carolina.  She graduated from Asheville High School in 1987 and enlisted into the United States Air Force in January 1988. Her assignments included Andrews AFB Maryland, MacDill AFB Florida, Keesler AFB Mississippi, Aviano AB Italy and McConnell AFB Kansas. She started her military career as a Logistics technician and then re-trained as a Medical Laboratory technician and retired as the Wing Career Advisor.

As a Logistics Technician at Andrews AFB, she was the central point of contact for the verification of all priority communication requisitions for 55 supply accounts through base logistics channels supporting Military Airlift, White House Communications and Air Force One Presidential Air Missions. As a new Airman, she briefed senior leaders on all mission essential communication equipment capabilities.

She then moved on to Aviano Air Base Italy, where she was selected to stand-up the first ever military clinical laboratory at a foreign hospital. She directed and performed laboratory tests for the diagnosis and treatment of disease to include chemical, microscopic, bacteriological, hematological, coagulation and point of care testing to assist physicians and pathologist in diagnosis and patient care.

While assigned at McConnell AFB Kansas, MSgt Davis was the Superintendent, 22ndMedical Support Squadron, NCOIC Clinical Laboratory Services, Unit Deployment Manager and the additional duty First Sergeant. As superintendent, she was responsible for laboratory, radiology, pharmacy and logistic departments. She set strategic operational and financial goals for the organization as a primary member of the executive team and oversaw employee issues, morale and welfare, and appraisal reviews. She also orchestrated acquirement of Homeland Defense Response equipment and mobile units. In 2002, her team received the Laboratory of the Year award.

After her time in the medical career field, she was selected to serve as the Wing Career Advisor for McConnell AFB, Kansas. As the Career Advisor, MSgt Davis was the principle advisor to AF Senior Leaders on retention issues and a mentor to over 4,500 Airmen assigned to McConnell AFB, two detachments and one geographically separated unit, 10thAir Support Operations Squadron at Fort Riley Kansas. Her duties encompassed professional development training, force shaping and career, benefits and transition counseling.

Kimberly earned a certification in Blood Donor Phlebotomy from the American Association of Blood Banks, a certification in Principles of Instruction, an Associate in Applied Science in Logistics and an Associate in Applied Science in Medical Laboratory Technology from Community College of the Air Force. She also holds a Bachelor of Science degree in Human Resources Development from SouthWestern College and a Master of Arts degree in Management and Leadership from Webster University.

Since retiring, Kimberly has been heavily involved in her community with various organizations. She served as a Girl Scout Troop Leader for 8 Years, the Assistant STEAM Camp Director for a non-profit organization providing youth educational programs in the areas of Science, Technology, Engineering, Arts and Math (STEAM). She also volunteered at the VA Hospital as the Clinical Pastoral Education Program Assistant and with Hands-on-Charlotte at various events.

Kimberly is currently the Voluntary Service Specialist (Volunteer Coordinator) for the W.G. (Bill) Hefner Medical Center in Salisbury, NC, where she is responsible for the recruitment, placement and management of volunteers, donations, public relation and special event coordination.

She resides in Concord, NC with her husband of 25 years, William Davis Jr. and daughter, TyDasia Davis.